Clostridioides difficile (CD) belongs to the group of opportunistic anaerobic bacteria that cause diseases of the digestive system of humans and animals. CD are gram-positive rods that produce toxins that are harmful to health (TcdA and TcdB) and spores resistant to high temperatures, and commonly used cleaning agents [1]. CD is not an invasive bacterium, but after a long-term antibiotic therapy resulting in the inhibition of the development of normal bacterial flora in the patient, it causes post-antibiotic diarrhea, which affects up to 10% of hospitalized people. The most common complications after CD infection include pseudomembranous colitis (in 25% of patients) and a very severe form of infection occurs in 3% of patients and in 11% of patients who became infected with the hypervirulent strain [2]. Multiple intestinal perforation, peritonitis with secondary sepsis and death may occur.

Over the last ten years, highly developed countries have seen a marked increase in the incidence and severity of infections. Moreover, disease relapse after the first treatment occurs in about 20% of patients, and in about 40% after the second treatment [3]. Data collected by the European Center for Disease Prevention and Control (ECDC) from 556 hospitals in 20 European countries showed 7,711 cases of CD infections in 2016. However, the authors of the report point out that this number is significantly underestimated due to the low number of tests performed and the lack of a top-down requirement to report such cases [4]. Also, tests are carried out mainly in highly specialized hospitals, and infections occur most often in internal departments, geriatric wards and nursing homes. Older data show over 120,000 cases of CD infection in 2011 in Europe, of which 3 to 30% resulted in patient death. It is estimated that the cost of treating a single patient amounts to approximately EUR 9,000 and is strictly dependent on the additional time the patient has to spend in the hospital [5]. It is worth mentioning that CD bacteria are resistant to many commonly used antibiotics (cephalosporins, fluoroquinolones, carbapenems, clindamycin, monobactams, less to macrolytes, penicillins, sulfonamides and trimethoprim), as well as to antibiotics used to combat them [6,7]. There are no therapies or supplements that would assist and speed up recovery. The prevention of infections comes down to frequent hand washing and the use of disposable gloves, which does not seem to be entirely effective. The product we propose works on a completely different principle than antibiotics. It is based on safe, non-toxic IgY antibodies isolated from eggs of hens immunized with an epitope-specific conjugate for proteins located on the surface of the CD cell. Vaccination of chickens (widely available, with low maintenance cost) with a specific epitope results in the production of specific, protective antibodies at a much higher concentration than the products obtained by vaccination with the whole bacterium. 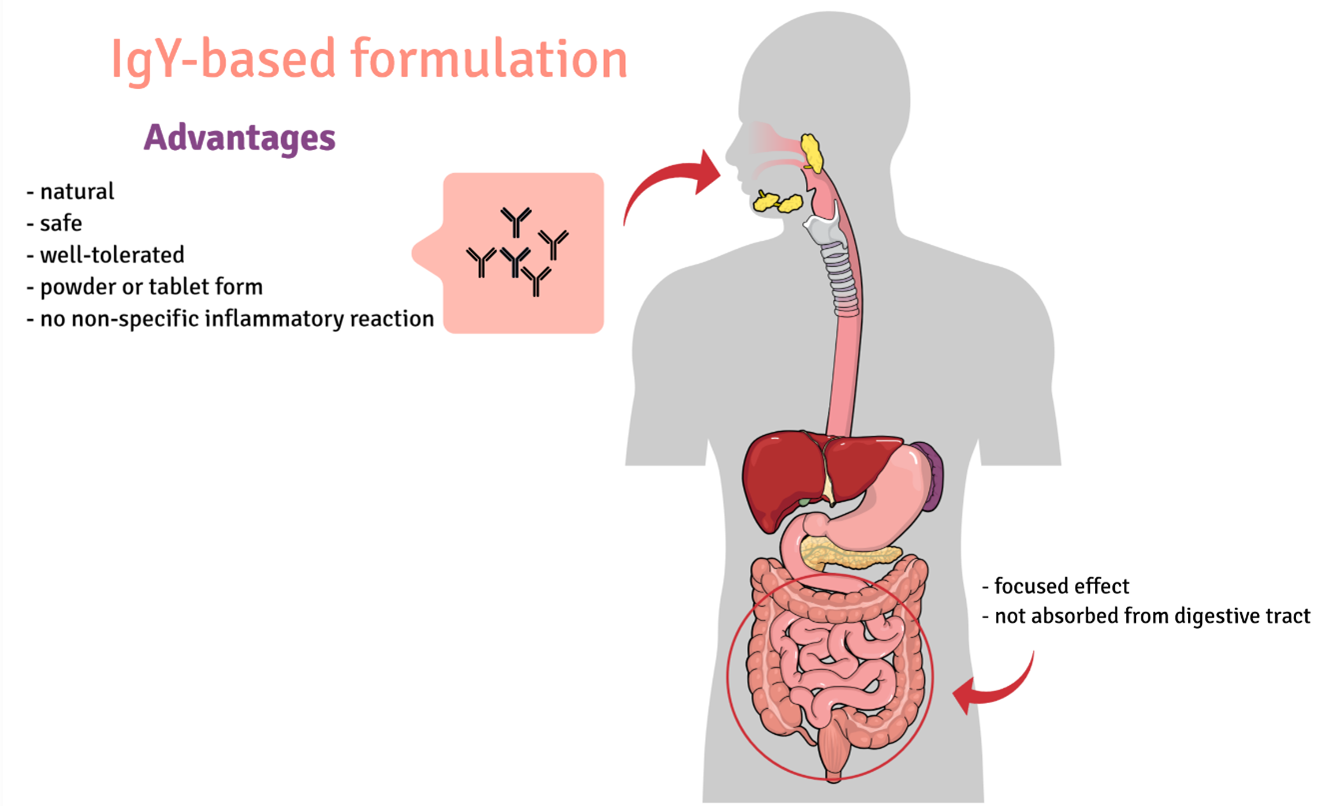 We based our research on immunoreactive proteins located on the bacterial cell surface. We identified new immunoreactive proteins with the use of serum from three groups: from people infected with CD, the umbilical cord blood and from healthy volunteers. The use of serum isolated from the umbilical cord is an innovative approach that allowed us to identify epitopes with potentially highly protective properties. As a result of our activities, we identified epitopes from four different CD proteins located on the surface of the bacteria. Some of our research has been published in recognized scientific journals [8,9]. The obtained epitopes were used to prepare a vaccine administrated to chickens. Large amounts of specific IgY antibodies (approx. 10 mg / egg) are isolated from the eggs of vaccinated chickens, much higher than in the case of bleeding other animals, like rabbits [10]. By focusing on the surface-localized targets, formulation will work as soon as the bacteria enter the body, before it multiplies and starts to produce the gut-destroying toxins. 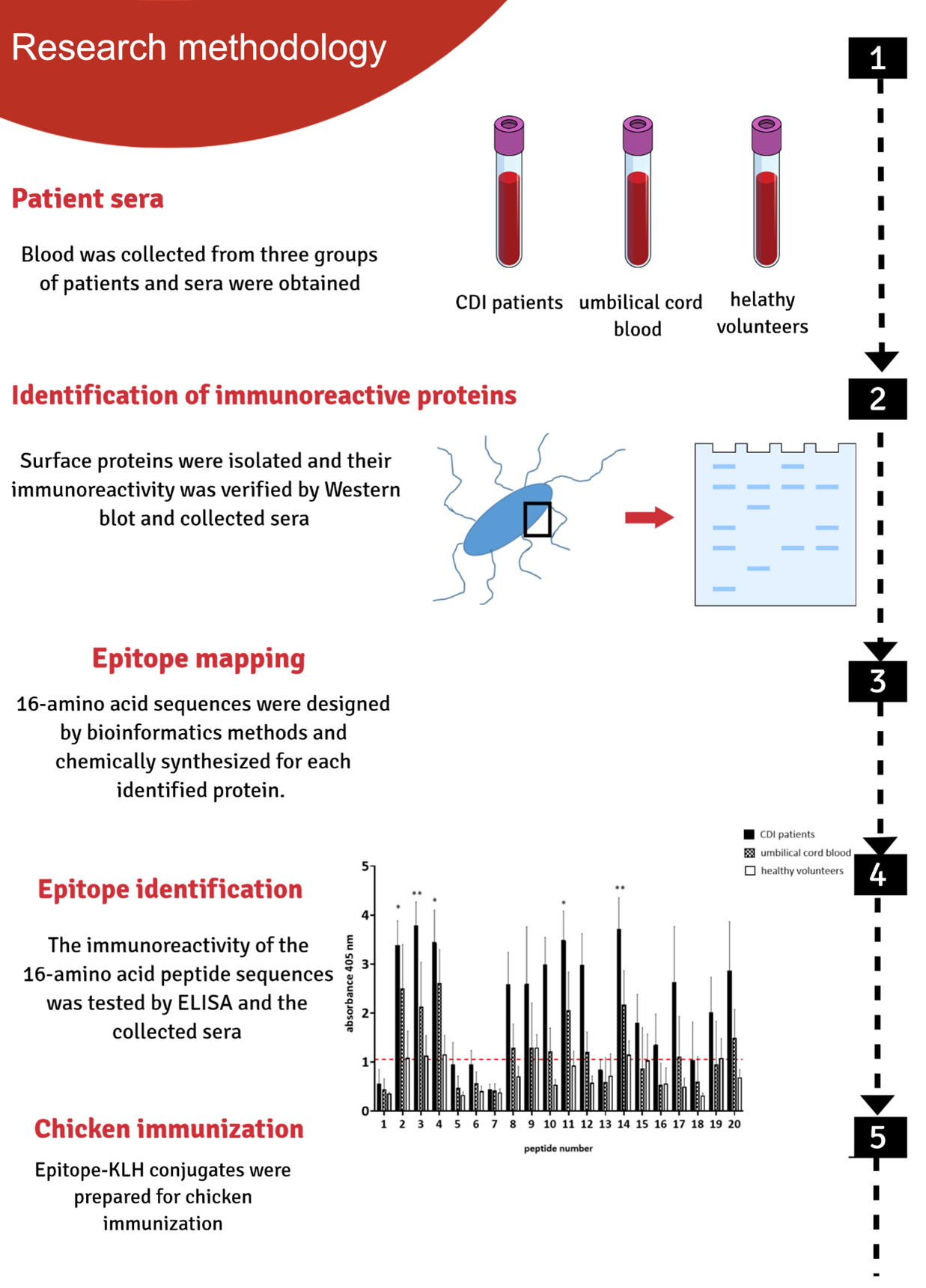 There are two large groups of people that can be potential recipients of the preparation. The first one, patients before a planned procedure in the hospital, especially people over their 60’ or with reduced immunity. Second, people who are already infected could use the preparation as a supplement in antibiotic therapy, which will potentially shorten the duration of treatment. However, the target group should not be narrowed down as the preparation could also be used preventively in long-term and palliative care units or in people who frequently use antibiotics at home.

The preparation we propose is characterized by the fact that it is of natural origin, which makes it safe. It is inexpensive to obtain and the production methods are widely used. The preparation is characterized by a much higher specificity than preparations obtained by immunizing chickens with whole bacteria. The preparation will be easy to use in the form of a powder to be dissolved in water (other forms of the product are possible, e.g. granules, tablets). IgY antibodies are resistant to the conditions in the digestive system, so there is no need to use sophisticated formulations. They are also resistant to high temperature, so the preparation does not require refrigeration.